The 2 events I look forward to each year more than any other are ThinkVisibility March and ThinkVisibility September. They simply are the greatest conferences. This time was no exception.
Both in terms of the presentations and the attendees, it is a friendly, informative, face-hurtingly funny, utter belter of a weekend.

This being the sixth “ThinkVis” I have attended there are a lot of faces I am familiar with and it is always great to catch up with old friends. There are always a good number of new people too, mind and making new connections is just as satisfying. ThinkVis feels like a family gathering in many ways.

As always, the conference starts in style on Friday night. Wiebke and I were lucky enough to be included in a reprobate’s dinner party, which may or may not have been organised by Nichola, with some of the great and the good in attendance, and us, and Jackie, and Geoff, and Shaun Hobo, and Pete, and Alex, and Anna, and Kev, and Chelsea, and Tracey, and Paul, and Gareth, and Dan.

Seriously though, it was a great start to a great night, a night which will not in any way, shape or form, be documented here. Other than this very respectable photograph (courtesy of Jackie) of some of the people there, all of us sober too, honest.

The Conference Itself, Saturday

I have said this before, and I will say it again, if you want to get all the gen from all the talks, buy a ticket and support the greatest conference. That said, if you are really desperate, I will link to posts where talks are detailed, but seriously, buy a ticket and come along, if for nothing else then to buy me a beer.

There is something that most people will learn from most of the sessions, there’s plenty for everyone to learn in between the sessions. The people who come to Thinkvis make it what it is, both speakers and attendees.

With all that said, the sessions I enjoyed the most were:

The other sessions I attended were great too, and I heard good things about those I didn’t attend too (in particular Dan McGuire‘s Outsourcing for Cheap Bastards, which, by all accounts, had many people crossing their legs whilst laughing)

The were other great sessions, of course, the above were merely my favourites!

Malcolm Slade‘s The Rise of Brands in Search [haven’t found Malcolm’s slides anywhere, yet]
Anna Lewis‘ Website Statistics: 60% of the time it works everytime
Kean Richmond‘s So I’m #1 in Google, but now what?
Dan Harrison‘s 25 Useful things you can do with WordPress
Carla Marshall‘s VSEO Strategies: Why YouTube is so Much More Than Kittens & Car Crashes
Pierre Far‘s Understanding Google Crawling & Indexing

Dinner on Saturday can be summed up by four words:

Well you had to be there.
My face still hurts, thank you one and all.

If you’re not already convinced that Thinkvisibility is worth attending every March AND September, then, honestly, where else would you get to play on a bouncy castle, inside a casino? 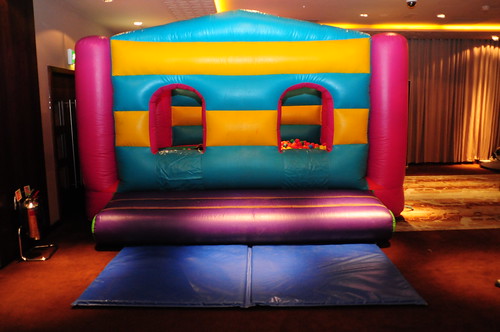 image credit @sk8geek, who has a whole thinkvis album worth viewing on Flickr.

Finally, here’re a load of other write-ups of ThinkVis 7, if I have missed any, let me know in the comments:

Many many thanks to Dom for a sterling time. See you in September for ThinkVis8.

< The Unreality Of Interlinked Social Media > Money for Hate