LoveDaPop, recent Dragon’s Den candidates, recipients of £70,000 of investment from Peter Jones and Saatchi & Saatchi London employees have shown just how utterly shit they are at social media.

They cynically attempted to promote their product on the back of the London riots: 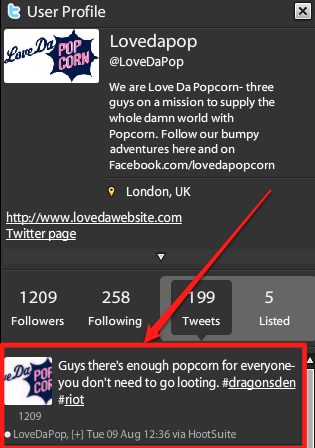 They’re not the first to try such a stunt, which makes it all the more idiotic. Didn’t they read AdAge’s post about Kenneth Cole pissing off all of Twitter with his tweet about the Egyptian riots? Did they think that Econsultancy’s piece on Habitat riling Twitter when they spammed the hashtags #Iran and #Mousavi?

They then went on to: 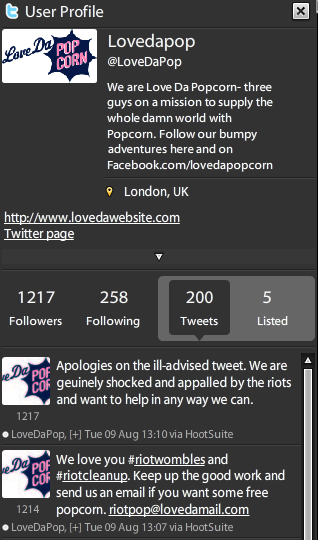 The Effects of Being an Arse in the Social Space

At the time of writing this, my Twitpic has had around 1250 views in the space of about an hour. That’s one person every 3 seconds getting exposed to the message, you could say it has gone a bit viral, not a lot, but a bit. Those views come from, believe it or not, only 44 tweets as the screengrab below shows (screengrab from the frankly wonderful Trak.ly):

Whereas, LoveDaPop’s special email address they set up to offer got exactly ZERO retweets:

What LoveDaPop Could / Should Do to Redeem Themselves

It’s not about deleting tweets, it’s not about apologising, it’s not about saving face. They said they want to “help in any way we can” yet it would appear they don’t have a clue about what they can actually do. Well, here are some pointers, for free:

Only, don’t come to me looking for help. You’re on my banned list. As is anyone else who could possibly entertain the thought that trying to market popcorn on the back of rioting, looting and human suffering is in anyway even remotely acceptable no matter the medium you use to do it.